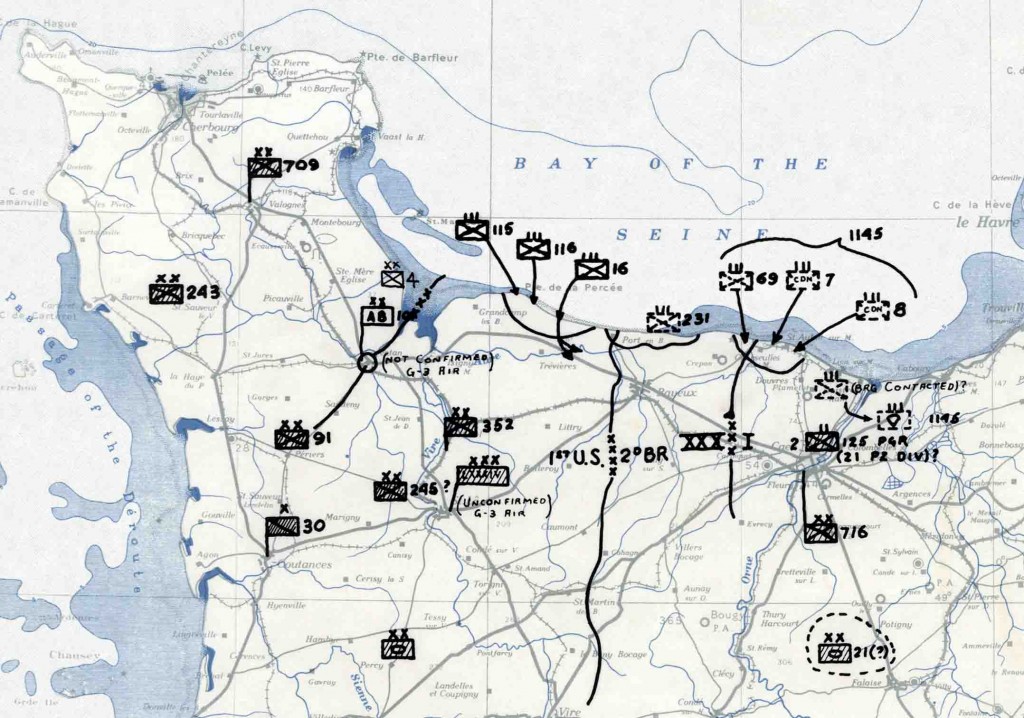 On June 6th, 1944 main allied forces reached French coast. Operation Overlord begun. As Stephen E. Ambrose points: „In one night and day, 175,000 fighting men and their equipment, including 50,000 vehicles of all types, ranging from motorcycles to tanks and armored buldozers, were transported across sixty to a hundred miles of open water and landed on a hostile shore against intense opposition. They were either carried by or supported by 5,333 ships and craft of all types and almost 11,000 airplanes.“ At the end of the day the beaches were controlled by allies at a cost of nearly 5,000 casualties. Today is 66th anniversary of D-Day. Please stop for a minute to pay tribute to all those men who freed the Europe.

Following sentences are, for me, probably best portrayal of battlefield after the gigantic battle:

On the beach itself, high and dry,were all kinds of wrecked vehicles. There were tanks that had only just made the beach before being knocked out. There were jeeps that had burned to a dull gray. There were big derrics on caterpillar treads that didn’t quite make it. There were half-tracks carrying office equipment that had been made into shambles by a single shell hit, their interiors still holding the useless equipage of smashed typewriters, telephones, office files…
But there was another and more human litter. It extended in a thin line, just like a high-water mark, for miles along the beach. This was the strewn personal gear, gear that would never be needed again by those who fought and died to give us our entrance into Europe.
There in a jumbled row for mile on mile were soldiers‘ packs. There were socks and shoe polish, sewing kits, diaries, Bibles, hand granades. There were the latest letters from home, with the address on each one neatly razored out – one of the security precautions enforced before the boys embarked.
There were toothbrushes and razors, and snapshots of families back home staring up at you from the sand. There were pocket-books, metal mirrors, extra trousers, and bloody, abandoned shoes. There were broken-handled shovels, and portable radious smashed almost beyond recognition, and mine detectors twisted and ruined.
There were torn pistol belts and canvas water buckets, first-aid kits, and jumbled heaps of life belts. I picked up a pocket Bible with a soldier’s name in it, and put it in my jacked. I carried it half a mile or so, and then put it back down on the beach. I don’t not know why I picked it up, or why I put it down again.
Soldiers carry strange things ashore with them. In every invasion there is at least one soldier hitting the beach at H-hour with a banjo slug over his shoulder. The most ironic piece of equipment marking our beach – this beach forst of despair, then of victory – was a tennis racket that some soldier had brought along. It lay lonesomely on the sand, clamped in its press, not a string broken.
Two of the most dominant items in the beach refuse were cigarettes and writing paper. Each soldier was issued a carton of cigarettes just before he started. That day those cartons by the thousand, water-soaked and spilled out, marked the line of our first savage blow.
Writing paper and air-mail envelopes came second. The boys had intended to do a lot of writing in France. The letters – now forever incapable of being written – that might have filled those blank abandoned pages!
Always there are dogs in every invasion. There was a dog still on the beach, still pitifully looking for his masters.
He stayed at the water’s edge, near a boat that lay twisted and half sunk at the waterline. He barked appealingly to every soldier who approached, trotted eagerly along with him for a few feet, and then, sensing himself unwanted in all the haste, he would run back to wait in vain for his own people at his own empty boat…