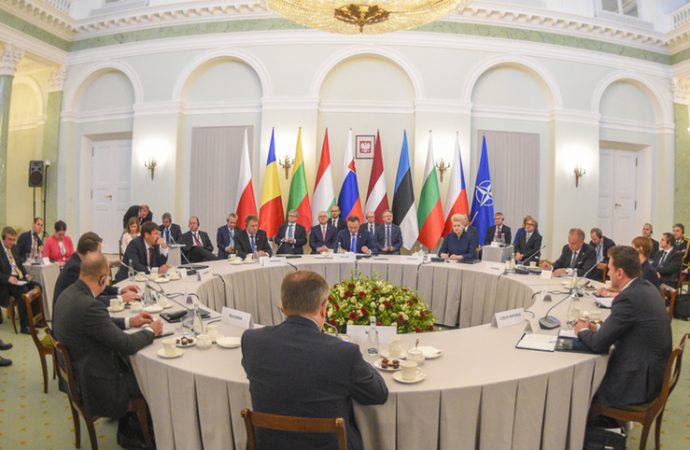 In June, Presidents of Bulgaria, Estonia, Hungary, Latvia, Lithuania, Poland, Romania, Slovakia and the Czech Republic (represented by the President of the Chamber of Deputies), gathered in Warsaw in the Bucharest Nine Format, platform for consultation and dialogue to reaffirm commitment of these states to the NATO, share views on a wide range of challenges and threats to the Euro-Atlantic area, and emphasize their resolve to address them together with Allies and Partners.

The Bucharest Nine Platform is not a fragmentation of the Alliance. On the contrary, the establishment of the Bucharest Nine, a platform that has gained a good reputation among the strongest Allies, is proof that NATO is a genuine Alliance. Only a genuine Alliance, based on fairness and equality, enables the free establishment of regional platforms. Could you imagine that any such platform could have existed within the Warsaw Pact? The answer is no, because the Warsaw Pact was not a genuine Alliance but a military tool of the Soviet Union. The North Atlantic Alliance is not a military tool of anyone.

The B9 Platform requires the same approach as other regional groupings like the Visegrad Group or the Three Seas Initiative. This approach is based on realistic, pragmatic considerations. The members of the Platform have similar security interest and should be ready to constantly assess in which concrete issues the cooperation is valuable, both for B9 and for the entire Alliance. Tangible results should be always seeked for.  This is exactly how the United States also sees groupings like the Bucharest 9 and the Three Sees Initiative alike.

The NATO and EU membership is the core of the foreign policy of the B9 member states. It is their vital interest that both organizations pursue consistent and coherent policies. They value a NATO that is prepared to defend the region, and that has enough political will and the capabilities to do so. The nations gathered in the B9 want to see an agile, ready and deployable NATO. All this is a prerequisite for NATO openness towards external partners, including the difficult ones, like Russia.In this light, they welcomed the message voiced by president Trump in Warsaw previous year that the new American administration is going to continue with the European Reassurance Initiative. Moreover, the US administration is going to add more money and the European Reassurance Initiative has turned into the European Deterrence Initiative.

It should be absolutely clear, the credible deterrence is not an offensive posture, but a defensive and peaceful one. We need deterrence not in order to fight but in order not to have to fight.

In the Warsaw declaration, the B9 representatives underlined the United States and Canada’s enhanced military presence in Europe as a sign of solidarity and of a strong commitment to our security. But solidarity is not a one-way street. It requires an appropriate response. It means a fair distribution of the financial burden, but not only that. The states of so called eastern flank should be ready for a proper balance between territorial defense and NATO’s ability to project stability beyond the Alliance’s borders. The B9 should be supportive of a proper balance between the Alliance’s readiness to strengthen the “eastern flank” and its readiness to cope with threats stemming from the South, including terrorism. The states of the B9 should also, by their own means and capabilities, actively contribute to the security of the “eastern flank”. It is their “business”.

The B9 Warsaw declaration states:

The Bucharest Nine is a platform for consultation and dialogue to reaffirm our commitment to the North Atlantic Treaty Organization, share views on a wide range of challenges and threats to the Euro-Atlantic area, and emphasize our resolve to address them together with our Allies and Partners.

There is certainly a rich spectrum of issues that needs to be consulted over. Many of those issues have been set by the last NATO summit agenda. But there is one particular issue that needs the attention too.

This is the growing gap between the European and the US security and military strategies. The new National Security Strategy of the USA, published in December 2017, represents a significant shift in the US’s strategic thinking and policymaking. The adversaries, rather than terrorism, are at the center of the NSS’s attention, and the US is openly declaring a resolve to approach them from a position of strength. The new strategy also states that the US will rethink the policy of engagement with rivals. Not only was “engagement” a part of US policy under the previous administration, it is also at the core of the political or military doctrines of most European states. Another remarkable characteristic of the NSS is that the US does not see military force just as an instrument of urgent crisis management. It attaches to the military a significant role in pursuing America’s national interests.

At the same time, the wording of the NSS, as well as of other partial strategies, such as the new US defense strategy, the new US Iran Strategy or the new US nuclear posture, clearly indicate that the US will seek to cooperate with partners while handling different security issues from a position of strength. All these doctrinal documents identify Europe as a key partner. Therefore, the Europeans, do not only need to thoroughly analyze these documents, but they also need a frank political debate to determine whether this trend in US foreign policy represents an opportunity for Europe, or not. The Bucharest Nine Platform provides an excellent opportunity for such a debate.

The opinions expressed in this article are the author’s own and do not necessarily reflect the view of the Czech ministry of Foreign affairs.

Photo: Office of the President of the Republic of Lithuania/Robertas Dačkus