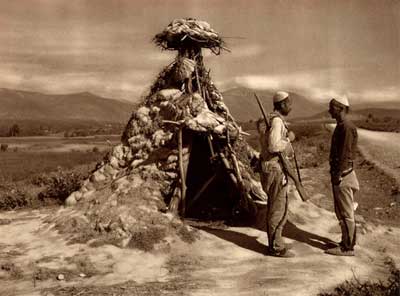 And they did it, they really did it! Monument that was erected in November 2012 in the south of Serbia was removed few days ago by Special Forces of Serbian Interior Ministry! Probably this blog would not be so interesting if the aforementioned monument had not been actually built in center of Preševo to stand as a reminder of 2001 armed insurrection of local Albanians gathered in Liberation Army of Preševo, Medveđa and Bujanovac (southern towns of the Republic of Serbia adjacent to territory of Kosovo).

By honoring their dead compatriots in this way local Albanians have crossed the line towards support of terrorism, or at least this is how Belgrade sees the whole mess. For the past two months Serbian authorities have spoken, at times even threatening with use of force, about removing this piece of stone and ethnic tensions have risen considerably. Local Albanians, for their part, have remained adamant in keeping the monument and stood opposed to any actions of the state government. Finding one’s way out of this Balkan conundrum is never easy, thus there are couple of things that should be pointed out if all this unfortunate business of monument-erecting and monument-removing is to be fully understood.

On the one hand, it has to be clear that Belgrade reserved all rights to remove the monument, and the fact that it was removed peacefully is a testament to a well-planned and efficiently executed action. However, the story of ‚who had right to what‘ does not actually end here. Truth is that, although Belgrade has firmly insisted on respecting laws of Serbia, the state authorities have done very little, if anything really, to create a new discourse that will not depict all Albanians as usual suspects, i.e. traitors, terrorist-lovers, and warmongers.

Moreover, if the state of Serbia intends to protect its territory and enforce its laws, then it is entitled to do that by all legal means, but perhaps what Belgrade should try is not to be selective in its approach! Territory in southern Serbia next to the border with Kosovo is populated by Albanian majority living in poverty and these people are predominantly considered outcasts to Serbian society. If Serbia wants to prove its strength, then it should show its presence in the region not only in display of force, but, above all, by embracing people who live there not just as a statistical number but as a community with its identity and culture.

And sure, there will be a number of problems, considerable problems may I add, for many Western states have failed in similar attempts of social inclusion, but this does not in turn mean that this attempt should not be made. If local Albanians are often dismissed as refusing inclusion in Serbian society, then Belgrade is equally guilty of doing very little to give impetus to this very process. I am quite aware, for that matter, that Serbia is not an economically well-off France or politically stable UK, but I see no other way except that one of dialogue! That Belgrade needs to start thinking of causes rather than consequences is a necessity, and an urgent one at that!

On the other hand, I do wonder what Serbian security agencies were actually doing since it seems that the monument sprang up out of nowhere back in November last year. I find it hard to believe that these specialized security agencies had no clue whatsoever on what was about to happen. In addition, knowing that Serbia keeps considerable police forces in the south of the country, I see very little chance that something like this could have been overseen by those who were supposed to be keeping a watchful eye on the state security. If this is really just another mistake, then Belgrade needs to seriously revise its security policies. I am afraid, however, that, judging by past two decades, state security agencies still continue  to operate using modus operandi of the 1990s, i.e. ‚see and wait what happens,‘ although this course of action has on a number of occasions proven to be ineffective and largely destabilizing.

Last but not least, local Albanians have to prove their own commitment to the Republic of Serbia and thus renounce those radical forces that would resort to violence rather than to peaceful means of attaining political goals. This is not just a matter of publicly stating that local Albanian population is accepting Serbian institutions, but also trying to engage in dialogue over a number of issues and insisting on this dialogue to continue. It is certainly true that Belgrade has delivered very little of what was promised by the Djindjić government back in 2001, but still there is no other way forward but by negotiation.

If some locals think that armed insurgency, and perhaps a completely unlikely scenario of independence from Serbia by joining Kosovo, is going to solve anything, then they are wrong since support of international community is simply not there! Having legitimate political aspirations and attaining them peacefully is one thing, but engaging in terrorist activities is definitely quite another. Thus, local Albanians need to locate, similar to their fellow citizens Serbs, that fine line between cheap talk and responsible political actions. Then and only then will both nations be in position of really changing anything for the better.