Innovation and cooperation are crucial for Baltic Sea region 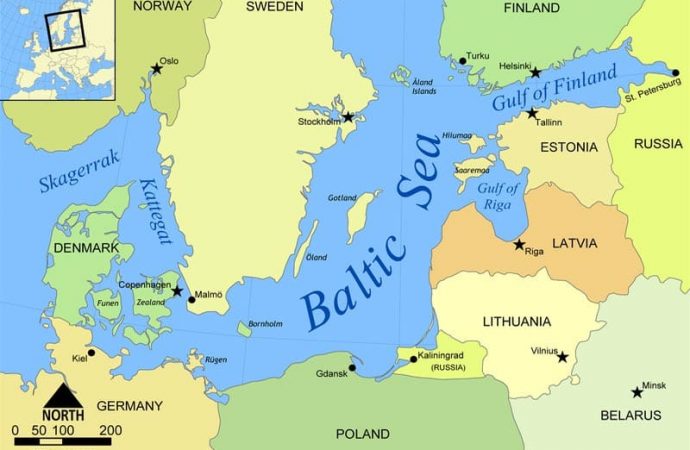 We cannot get it wrong saying that the Baltic Sea region we used to know in the past is all different place right now. Quite swiftly, Russia transformed from the regional partner to the regional competitor which often undertakes confrontational steps. Among the key challenges we all facing today in the Baltic Sea region are the significant military buildup of the Russian Federation Armed Forces at our doorstep and expansion of Russian Anti Access/Area Denial (A2/AD) capabilities which – in the event of crisis or armed conflict – will not only affect deployment of the allied forces in the Baltic Sea but will most certainly disrupt merchant shipping and a whole spectrum of other maritime activities in the Baltic region and beyond.

As a consequence of increased Russian Armed Forces activities in the Baltic Sea region and their often provocative posture, we observe frequent disruption of the economic activities in the Exclusive Economic Zones (EEZs) of the Baltic countries, such as diversion of the merchant shipping traffic and commercial flights. Russian Navy adopted the approach of establishing NOTAM (Notices To Airmen) in exclusive economic zones of neighboring nations. Definitely, such activities contribute to deterioration of security situation in the region and negatively impact economies of the Baltic region’s nations.

Having overviewed key challenges and threats to the regional security, we can briefly cover main means of their mitigation. Despite different views in political circles regarding scope and potential of Russian threat posed to Western nations in the maritime domain, it should never be underestimated and navies of the Baltic Sea region NATO and EU nations, as a maritime community, have to constantly work on developing tailored response to those threats, as well as to educate political musters on the importance of the maritime domain. At the same time, it is critical to be able to support land operations through free movement of reinforcements by sea. For that we need to be able to assure safety of sea lines of communication (SLOCS) in times of crises or conflict.

Considering rather unpredictable and confronting nature of the security situation developments in the Baltic Sea region, it became obvious that there is urgent necessity of establishing overall coordination of efforts of the regional navies of NATO and EU nations. This is where the role of NATO HQ MARCOM becomes extremely important. Also, recent establishment of DEU MARFOR can be seen as an important enabler complementing HQ MARCOM efforts and will significantly contribute to our preparedness and ability to adequately respond to current and future challenges in the maritime domain.

Comprehensive awareness of the Baltic Sea operational environment is a critical precondition necessary to assure NATO ability to shape quick and tailored response to current and foreseen threats. It is self-evident that Maritime Situation Awareness is directly related to our ability to timely respond to rapidly changing situation at sea. Currently, the regional navies actively participate in SUCBAS (Sea Surveillance Baltic Sea) project which at the moment provided a solid basis for sea surveillance information exchange co-operation within the Baltic Sea area and its approaches. The aim of the co-operation is to enhance Maritime Situational Awareness benefiting maritime safety, security, environmental and law enforcement activities in the region by sharing relevant maritime data, information and knowledge between the participants.

Continuous training and exercise are important enablers necessary for developing regional navies’ competence to cope with current and future challenges. In this context, we have to mention two large scale maritime exercises – traditional US BALTOPS and inaugural BALTIC PROTECTOR 2019 which marked the first anniversary of Joint Expeditionary Force Memorandum of Understanding (MoU) signing. Both exercises showcased our ability to successfully implement wide range of training objectives, including amphibious landings. Besides that, they served as a powerful deterrence and strategic communications measures signaling our ability and resolve to swiftly and professionally act together should security situation demand. Other regional exercises, such as the Northern Coasts contribute to further developing skills needed to operate in the demanding environment of confined and shallow waters. Those skills are absolutely critical for securing operational superiority in the Baltic Sea environment.

Experimentation and innovation are important tools making regional navies adequately prepared to cope with current challenges and guarantee our success and relevance in the future. Lithuanian Navy strives to be an active part of this process contributing to OCEAN 2020 (Open Cooperation for European Maritime Awareness), funded by the European Union’s Preparatory Action on Defence Research and implemented by the European Defence Agency. The project has the main objective to demonstrate enhanced situational awareness in a maritime environment through the integration of legacy and new technologies for unmanned systems, ISTAR payloads and effectors, by pulling together the technical specialists in the maritime domain covering the “observing, orienting, deciding and acting” operational tasks.

Within the framework of this project, in August 2019 the Lithuanian Navy and Baltic Institute of Advanced Technology conducted unique trials in the Baltic Sea. Communication technologies enabling real-time information exchange about the maritime environment using aerial, surface and underwater drones had been successfully tested. UAVs tested in the project will enable more rapid response of our ships to the activity in the maritime environment, and the communication equipment will ensure real-time information exchange with shore-based headquarters. Those trials were an important milestone in preparation for the international trials in the Baltic Sea that are scheduled for August 2020 and will be coordinated by the Swedish Navy.

Shifting focus to trilateral cooperation among the Lithuanian, Latvian and Estonian (3B) navies, we have to point out that it serves as a perfect effort and capability multiplier.  At the same time, it contributes to a better degree of interoperability among 3B navies. Various spheres of cooperation include regular exercises, personnel education and training, as well as semi-annual staff talks at the level of Navy Commanders. In conclusion, we can clearly observe that the security situation in the Baltic Sea region remain quite tense and prone to unexpected changes. To be able to respond to those challenges, we should keep the momentum of already existing regional cooperation formats and be pro-active developing the new ones.