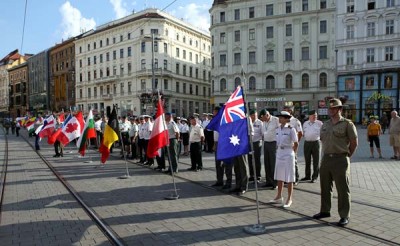 This text is based on speech given by former Minister of defence of the Czech Republic and current ambassador to NATO Jiří Šedivý on CIOR Summer Congress Brno in 2013.

Context
It goes without saying that the significance of reserve forces and their added value for our security and defence are growing. There are at least three good arguments for that:

First, in the present times of austerity, with the consequences for defence budget and personnel cuts, demand for reservists to support, augment or even substitute for incomplete, declining or deployed capabilities has been growing. At the same time, most of our nations are on the trajectory of a long-term demographic decline. The pool of willing and able citizens ready to be recruited to serve our nations professionally in uniform has been shrinking. Commensurately to that, i.e. less money and less people, reservists are becoming indispensable for maintaining our defence capabilities. I would call this the economy of force argument.

The second argument is technological. As the sophistication of defence systems and progressive employment of dual-use technologies in the military affairs require ever closer co-operation and complementarity between the civilian and military worlds, reservists should serve as a vehicle for this kind of exchange, i.e. shuttling innovation and expertise between the two worlds. Cyber defence and information and communication technology currently represent the most obvious cases in point.

The third argument is societal. After the professionalization of militaries — and this has also been experienced in my country — it is crucial to maintain bridges between the armed forces and the population. At the same time, our societies have been changing: besides getting older, they have become more diverse, perhaps even fragmented, more urban-based and less “defence minded.” Thus reservists as one of the civil society networks, being a specific sort of volunteers – and “twice citizens”, as W. Churchill put it, play an important role in holding up the societal cohesion, spirit of citizenship as well as defence awareness in our nations.

Now the challenge is how to operationalize this growing demand. The first step should be mere understanding/recognition/acknowledgment that the current context requires a shift from the traditional concept of reserve based on mobilisation and draft towards a more flexible and enduring employment of reservists in supporting, augmenting or even substituting regular national armed forces. And I understand that CIOR has a significant function in building such understanding not only vis-à-vis national establishments but, and perhaps more importantly, towards NATO.

NATO Framework
The NATO Military Committee (MC) decided in July 2012 to launch a formal relationship between the Alliance and CIOR, thus creating a framework for better and, above all, more co-ordinated development and use of reserves in the allied context. At the same time the MC approved new terms of reference (ToR) for the National Reserve Forces Committee (NRFC). The latter was founded in 1981 and recognized as a NATO Committee in 1996.

The NRFC’s ToR provide for a wide array of activities, namely exchange of information and sharing of best practises among participating nations that may include: structure, organisation and administration of reserve forces; their education, training and exercising; force generation, force employment and supporting policies of reserve forces; capability development, interoperability and transformation of reserves in the NATO context; employer, family and community support for reservists, including legal conditions; welfare, including post-operational reintegration of reservists.  The NRFC is expected to provide policy advice in the above mentioned areas to the Military Committee.

This does not mean that NATO has set on the path of a reserve forces standardisation across its membership and activities. Nations will retain different approaches to the structuring of their reserve forces, their quantity, type, funding, training, availability, call-up and utilisation. The national variations are path-dependent, rooted in differences in history, social conditions and military culture of individual Allies. On the other hand, we should begin with the assumption/notion that the Washington Treaty and Strategic Concept – the latter specifying the present core NATO tasks, should orient the work of the Committee and practical development and employment of national reserves.

But above all, as NATO reforms itself permanently, the reserves cannot stand aside from that process, thus missing the transformation train. In that respect the Confederation’s initiative to work with the ACT on how to integrate a reserve component in the Connected Forces Initiative (CFI) is exactly the right approach. As NATO is expected to shift its emphasis from operational engagement to operational preparedness after ISAF close-down at the end of 2014, the Alliance will need to make a new effort in order to remain capable and maintain its forces at a high level of readiness and usability. Interoperability and connectivity of forces is a crucial prerequisite for that and CFI is the main driver. And I believe that the reserve component should be considered across all CFI activities, i.e. training, education, exercise as well as technological aspects of interoperability among NATO’s armed forces.

In addition to their military experience, reservists can contribute by virtue of their civilian expertise, especially with highly valued skills and enabling capabilities such as medicine, engineering, logistics, law, foreign languages, cultural awareness, information management and technologies, etc.  Most of these skills are especially relevant in the current and most likely also future crisis management context. The hybrid character of operations requires a balanced mix of military and non-military approaches, namely in the area of local capacity building and post-conflict stabilisation, i.e. the comprehensive approach.

Motivating Factors
The new Czech concept of active reserves puts a special emphasis on motivation. To realize its mid-term quantitative target of roughly 25 per cent of armed forces consisting of reserve (which would be about two times more than the current active reserve establishment) and, indeed, the projected qualitative parameters of the desired reserve capability, a set of incentives needs to be put in place. The key lesson learned from the more experienced countries is clear: it is much easier to motivate people to become reservists than to convince their employers to enable/support that.

The current practise in the Czech Republic of reservists having to conduct their military service activities during weekends and annual leaves is not tenable. The first step towards changing the perception of employers — and the overall culture of how the reserve duty is viewed by the population — is to start communicating about the issue. One should convince the employers that having reservists (who by definition are expected to possess an above-average moral profile and ethics of discipline as well) in their staffs is a good thing for the company and they should be proud of it. The idea of establishing a platform for discussions with employers should not be missed either. In a similar vein a form of a public appreciation/recognition of the support for reservists should also be considered, e.g. by means of awarding such a socially responsible and defence-minded company a prestigious title like “national defence partner”.

Financial compensation is indispensable especially in the private sector which is naturally profit-oriented. There has been a debate about some form of a tax relief for the private companies’ support but – similarly as for instance in the UK — this was rejected on the basis of the administrative complexity and cost of such a measure. It is much easier and transparent to pay direct compensation for the working hours spent on reserve activities.

Last but not least, in view of the technology argument stated above, especially for the high-tech companies, having a reservist expert well-placed in the defence establishment could bring not only mutual benefit in stimulating innovation, but also a comparative advantage for the company vis-à-vis  procurement and acquisition by/in the defence sector.

In concluding, one must be absolutely clear in the following: the increased reliance on reserve forces is by no means a miraculous remedy in times of economic austerity and demographic decline. It can be only a complementary measure, a partial solution. Yet it does not absolve any Allied government – the Czech one including, from the fundamental responsibility to adequately resource and maintain top notch military capacities in line with Article 3 of the Washington Treaty (In order more effectively to achieve the objectives of this Treaty, the Parties, separately and jointly, by means of continuous and effective self-help and mutual aid, will maintain and develop their individual and collective capacity to resist armed attack) to ensure that NATO has the full range of capabilities necessary to deter and defend against any threat to the safety and security of our peoples.