US withdrawal from the INF treaty 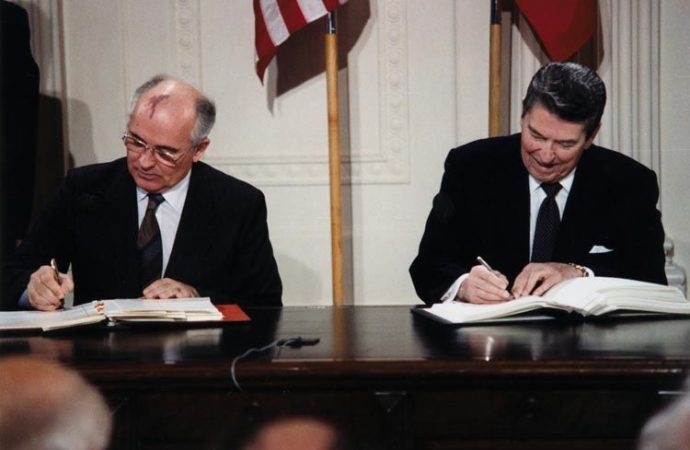 Author of this text Martin Svárovský is a historian and diplomat. He is currently working on Czech Ministry of Foreign Affairs. The opinions expressed in this article are the author’s own and do not reflect the view of the Czech ministry of Foreign affairs.

“We are Czechs, we shall never surrender!”
Paratroopers who assasinated Reinhard Heydrich facing vast superiority of the enemy in their last battle in crypt of the church of Sts. Cyrillus and Method

There is a clear logic behind the US intention to withdraw from the Intermediate-range Nuclear Forces treaty. In expert debates as well as in declaration of the foreign ministers of NATO, the Russian long track record of non-compliance with its obligations under INF (i.e. developing and fielding an intermediate-range missile system that can be used for both conventional and nuclear attacks) has a key position. In my opinion, there is more than Moscow´s “material breach of INF” behind the decision of the US administration. Following text highlights two interlinked factors. First, the Russian strategy of “escalate to deescalate”. Second, the US need to fill the capability gap, mainly in the tactical nuclear weapons.

Escalate to deescalate strategy and its implications
Foreign ministers of NATO recently concluded that Russia has developed and fielded a missile system, the 9M729, which violates the INF Treaty and poses significant risks to Euro-Atlantic security. Russia, NATO says, only recently acknowledged the existence of the missile system, but without providing the necessary transparency or explanation.

Nevertheless, the decision of the US administration to withdraw from the INF treaty is not only about Russia’s violation of the treaty but also about the development of the Russian military strategy. The assumption that the latest Russian strategy contains the tactic of nuclear “de-escalation strikes” plays its role. Russia could, for example, use a “small” nuclear weapon on NATO military targets, such as bases, ground forces, ships, or aircraft.

In other words, if Russia is about to lose in a conventional conflict, it will induce a limited nuclear attack with low-yield tactical nuclear warhead. Subsequently, it will offer the adversary (i.e. the West) the option not to choose a nuclear retaliation but rather a “de-escalation” in a form of a search for some “reasonable” agreement.  Such an agreement might be inconvenient for small countries like the Czech Republic.

From the military point of view, Russia, by introducing the concept of “escalate to deescalate”, needs to counter three inconvenient phenomena. First, the conventional superiority of the West, second, the unacceptability of the apocalypse, linked to the use of strategic nuclear weapons and finally the Russian need to counter the new US concept of the “Prompt Global Strike”. PGS is a United States’ military effort to develop a system that can deliver a precision-guided conventional weapon airstrike anywhere in the world within one hour, in a similar manner to a nuclear ICBM. Weapon such as the hypersonic missile would allow the United States to respond far more swiftly to rapidly emerging threats than is possible with “ordinary” conventional forces. A PGS system could also be useful during a nuclear conflict, potentially replacing the use of nuclear weapons against certain targets.

In 2013, vice Prime Minister Rogozin stated that the Russian Fund of Perspective Researches (FPI) would develop a military response to the PGS system. The inclusion of non-nuclear weapons for strategic purposes appears to have received an official sanction also in the most recent Russian military doctrine. However, most of the Russians‘ progress remains classified. Substituting conventional weapons for this purpose is a vision. At present, Russia still heavily depends on nuclear weapons.

All this tactical nuclear potential is multiplied by the so-called Anti-Access/Area Denial concept, beloved by Russian strategists. This concept, as I see it, serves not only as a protection of their own territory but it also provides a coverage of the conquered foreign territory. As such, it is an element of the offensive posture. Most striking components of the Zapad 2017 exercise for countries on the “Eastern Flank” were enormous increase of the combat-readiness of the Russian troops and the intensive training of A2/AD concept applied on the Baltic states territory. This ensures Russia that the possible NATO liberation operation of the Baltic states would be very costly, demanding and thus extremely politically sensitive.

From the strategic point of view, the Russia’s escalate-to-de-escalate strategy rests on the notion that Moscow enjoys an advantage in the balance of stakes in its near abroad. This conclusion is understandable, but it is also contestable. US stakes in a conflict with Russia in Eastern Europe are also substantial. As Assistant Secretary of State for European and Eurasian Affairs, Wess Mitchel, or other relevant experts have stated, the reliability of the United States even for its smallest Allies is a value of itself. Matthew Kroenig, former U.S. Department of Defense and the CIA official has put it: If Washington loses Tallinn, it is risking losing Warsaw in the future. If it loses Warsaw, it might lose Tokyo, Seoul or Tel Aviv in the future.” The Czech Republic, Poland or Baltic states can only hope that this way of thinking of the current US political elite is a guarantee against the idea of surrendering to any Russian nuclear strike. The idea that nevertheless does have advocates in the West.

Capability gap between US and Russia
Even after the end of the cold war Russia continued to see the West as a potential enemy. Therefore, Russia has fostered her ability to threaten her neighborhood. On the other hand, the USA seemed to be lulled by the conventional superiority and the ICBMs capability. In 2009, the US administration was tasked by president Obama to follow his “global zero” political concept (announced in Prague). It needed to fill this nice vision with a concrete content. Therefore, it concentrated on strategic nukes, which yielded up in the new Start treaty. Negotiation of the treaty and implementation of its verification mechanism costed enormous effort and energy for a long period of time. This might be also the reason, why not much attention was devoted to the field of tactical nuclear capabilities. In any case, the growing capability gap between the USA and Russia in tactical nukes is a matter of fact. Russia has a stockpile of 2,000 non-strategic nuclear weapons, according to the Pentagon. The U.S. has a few hundred active low-yield weapons deployed in Europe.

Meanwhile, the US needs to cope both with “escalate to deescalate” tactic as well as with massive training of A2/AD capabilities.  Not the USA nor the NATO have a flexible arsenal of low-yield nukes that can be positioned near the theatre in case of conflict.

In short, the US cannot react otherwise but by leaving the INF and trying to fill the already existing capability gap and to develop an intermediate-range ground-launched cruise missile among others. The 2018 US Nuclear Posture Review (NPR) calls for the development of two supplemental capabilities to address the above-mentioned gaps: a low-yield option on US submarine-launched ballistic missiles (SLBMs); and the return of a nuclear-capable sea-launched cruise missile. In addition, the Pentagon has announced plans to conduct research and development of an intermediate-range ground-launched cruise missile. In the legislation, the US Congress authorized $58 million for the program. These capabilities would provide the kind of flexible nuclear options required to react to the evolving Russian strategy and capabilities.

Within the European territory of NATO, it is wise to consider supplementing the tactical air-delivered B61 gravity bombs with tactical, air-launched cruise missiles, such as a nuclear-armed variant of a Joint Air-to-Surface Standoff Missile. Missiles would have the benefit of being able to penetrate Russian air defenses. As we can imagine, such nuclear posture recommendations will lead to a very sensitive debate in Germany where the B61, carried by the Tornado aircrafts, are stationed.

Political implication of the current stage remains unchanged
Russian capability to conduct limited nuclear operations designed to deescalate a conflict on terms favorable to Moscow represent a significant challenge to Western countries. In the event of a conflict, such capability might give Russia the upper hand if NATO lacks the assets needed first to overcome the effects of such employment or the resolve required to persevere through a limited nuclear war, which would be a contest of nerves. This could lead to the partial defeat of the Western Alliance over issues important enough for its members to judge it worthwhile to fight, a result that would have serious consequences.

However, this Russian capability will also have relevance in situations short of outright fighting. If Moscow believes that it has the ability to blackmail the West in some situations, Russia might become emboldened and more aggressive in certain contexts. Moscow might think that it would have better footing on the lower rungs of the ladder of escalation, likely due to combination of firmer resolve, faster tactical deployment, response time and its ability to conduct controlled limited nuclear operations. It can play a role in crisis or conflict similar to recent ones in Georgia, Ukraine or even in case of the NATO Baltic states.

Therefore, it is important for the Atlantic Alliance to be adequately prepared for a Russian tactics to use limited nuclear capability for coercive effect, either through threats or through actual employment. This means having effective tactical nuclear capabilities of its own, as well as the resolve to stand fast in the event of Russian use of limited nuclear strike and to respond appropriately with its own capabilities, nuclear or otherwise. NATO must continue to ensure the credibility and effectiveness of the Alliance’s overall deterrence and defense posture.

Conclusion
The security of mutual constraint is meant to reduce the risk of unintended consequences. But that only works when both sides comply with the treaty’s terms. Russia has variety of capabilities to conduct limited nuclear operations. While it is not precisely known how frequently, realistically, or comprehensively Russia has exercised the capability to conduct limited nuclear strikes to seek to favorably control escalation in their aftermath, it can be assumed that Russian forces have developed some considerable capability to do so. Thus, Russia has not only the will but also some significant ability to use nuclear weapons in a limited fashion for strategic effect. Therefore, the US must react accordingly and get rid of any limitation to the pre-emptive policy. This consideration led to the intention to withdraw from INF.

The latest move by the USA, backed by NATO, is not only about punishing Russia for “material breach”. It enables development of its own capabilities corresponding to both Russian capabilities and strategy alike. The integration of nuclear and conventional weapons in exercises and preparation of precise tactical nuke weapons should be seriously considered. The United States and NATO must make these changes, while minimizing the risks of causing major political frictions within Western societies. European officials have advocated for avoiding to deploy supplemental nuclear capabilities on European soil and to provide broader arms control, disarmament, and nonproliferation hooks on which to hang any supplemental capabilities.

Despite the latest consensus of the foreign ministers of NATO, it is quite clear we are ahead of a heated political debate in Europe. It will be fueled not only by the fact of the US withdrawal from the INF. The subsequent modernization of the strategic and tactical potential of the United States might have even greater effect. For the Czech Republic, it is a matter of key strategic importance that the Alliance will withstand this test. If it does – without major harm to its political coherence – NATO will further confirm its importance to the United States.  The Alliance should not be decoupled from the United States in this very sensitive agenda.

Last but not least, Every human being prefers peace to war. We have to keep in mind, the United States is not arms racing. They are responding to the Russian initiative.